Eighteen (18) Motor Coaches from the Amateur Radio Chapter came to Lakeside RV Park in Livingston, Louisiana to hold their fall 2015 Rally. The Rally spanned the dates of November 5 – 9 and thanks to the Livingston Convention & Visitors Bureau their “Rally” was a huge success.

The group initially contacted Jonathan “JT” Taylor, Assistant Director of the Livingston Convention & Visitors Bureau initially to inquire about brochures and welcome bags and this contact developed into a very rewarding experience and a friendship that made the rally truly unique and special for the group. JT provided a lot more than some brochures and a bag for them, he filled their Rally “Welcome Bags” with Livingston-themed items and delivered the bags to Lakeside RV Park. The colorful fun tote will serve as a shopping bag, as well as a keepsake. Inside, the bag there were many local merchant treats, brochures, coupons and a travel mug from the Denham Springs Antique Village. J.T. delivered the welcome bags a day before the official start of the Rally so additional items could be added by various vendors.

To cover a portion of the events of the Rally, the group made their first stop at the Livingston Parish Tourism Center in Albany. Mr. Eric Edwards, Executive Director of Tourism, greeted the group to the Center. While at the Tourism Center the group made a quick walk over to visit St. Margaret Roman Catholic Church, where Mr. Alex Kropog and his wife Royanne gave them the history of the Gothic Revival-style church built in 1910 by Hungarian emigrants. The Church was added to the National Register of Historic Places in 1992. After the tour of St. Margaret’s and the Hall of Saints, they traveled a short distance down the road to the site of the Hungarian Museum. The museum is located in the historic community school house and is still “a work in progress”. Glass cases are waiting to display items and clothing from the Hungarian settlement known as Árpádhon, that founded the area of Livingston Parish in 1896. Miss Royanne is their curator; and she takes this responsibility with much pride. She and Mr. Alex, see their pictures at the end of the article, told the group about the plans for the museum while they were treated to Hungarian pastries, Gerbeaud Szelet and Dios-Kifli, see pictures at the end of the article. Miss Royanne has authored a book, “The Story of Árpádhon”, describing the Hungarian Settlement from 1896 – 2006. All proceeds from sales of the book go towards the museum.

The next stop for the group was the historic Carter House in Springfield. While the group was at the house they quickly realized it wasn’t a large antebellum home but that it had its own unique story. The group was given some of the history of the house beginning in 1804 when the land was a Spanish Land Grant given to Mr. James Rheims. The most interesting bit of history for the group to learn was that the land was purchased by Mr. Thomas Freeman, a Free Man of Color, and the first African American to own land in Livingston Parish. Mr. Freeman built the plantation house between 1817 and 1820 and named it Sycamore. He and his wife and five children lived at Sycamore until 1838.

The information about the history of the house was given to the group by Ms. Robinson who is the Chairman of the Historic Carter House Society Inc. (HCHS). She also told them how HCHS was formed as a non-profit to restore the house and make it available for use by the public for

various types of events (weddings, receptions, showers, parties, and group meetings). The group of about 40 people learned that the fees collected from rental of the property go toward restoring the house.

During the group’s visit to the Carter House they were served a buffet luncheon arranged by JT. The group gathered in the dining room to enjoy food served by Bantaa’s Catering. The delicious luncheon was made up of items that had been pre-selected from Bantaa’s menu: Crawfish Etoufee with rice, pork roast with creamed potatoes, green beans, salad, rolls, dessert, and additional entrees making it a menu for all palettes.

Below is a picture of the group on the steps of the Carter House as they were departing for their next destination. The group mentioned they were unable to visit the Laser Interferometer Gravitational-Wave Observatory, the research center funded by the National Science Foundation so it will be on their itinerary when they return to Livingston Parish. 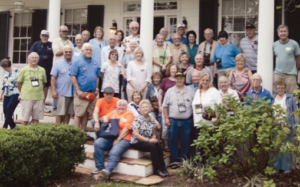 Pictured above is the Amateur Radio Chapter Fall 2016 Rally Group on the front steps of the Carter House after having enjoyed their lunch. 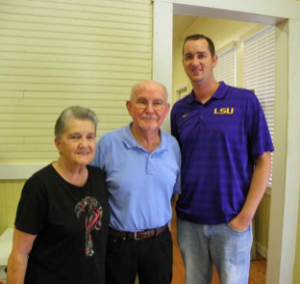 Pictured above, on the right, is J.T. Taylor, Assistant Director of the Livingston Convention & Visitors Bureau, standing beside Mr. Alex Kropog and Mrs. Royanne Kropog with the Hungarian Museum. Mrs. Kropog is the Curator for the Museum. 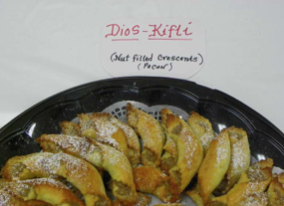